Nature has been purifying water and making it better for growing things for aeons. Rivers do it all the time with whirlpools - more technically known as vortices. Watreco's Vortex Processing Technology (VPT) takes fluid processing technology beyond 20th century mechanical and chemical engineering to deliver a known, controllable science based on physics and biomimicry. Decades of research, development and testing is now being delivered in productive, commercial applications by Watreco. Their VPT is one of the top Blue Economy Innovations selected for their ability to deliver increased employment, sustainable economies, sustainable communities and ecosystem regeneration.

MOSS is proud to be the distributor of VPT solutions in Australasia. In the same way that silicon chips power a range of computing devices, Watreco VPT products deliver a wide range of results depending on how and where they're used - in applications from fish farms to cooling towers to river recovery.

Key deliverables of VPT include increased water and energy efficiency and improved water quality. Two Watreco products are at the core of this next generation fluid processing technology - the Industrial Vortex Generator (IVG) and the FlowMix.

Industrial Vortex Generator (IVG)
The IVG has a wide range of industrial and commercial applications, from cooling towers to agriculture to concrete production.
The IVG is designed to produce a controlled vortex that:

FlowMixer aeration and mixing
FlowMixer units have a wide range of applications, from fish farming to sewage treatment. The vortex technology inside FlowMixer units is specifically designed to: 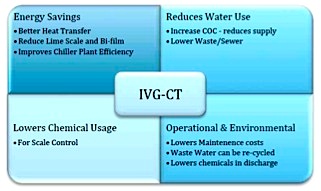 The science behind Vortex Processing Technology 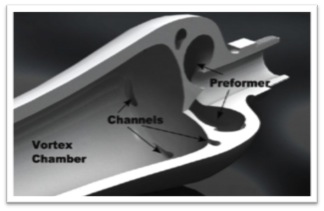 VPT allows a fluid to self-organize into an ordered vortex movement. Vortex movement is fundamental in nature. It occurs in galaxies, tornados, mountain streams and human blood flow. The unique biomimetic design of Watreco's vortex generators allows the harnessing of the extreme power of a tornado into industrial applications.

The Watreco vortex generator (patented) delivers a well-defined and controlled vortex at a considerably lower pressure and flow than other techniques can achieve. The vortex generator shapes the fluid flow in three stages:

1. Preformer.
The inlet of the vortex generator provides a smooth outward direction of the flow through toroidal motion toward a set of well-defined channels.

2. Channels.
After the preformer, the fluid is directed through a set of channels, each with vortex-forming geometry. Each channel delivers a jet stream of vortex flow into a vortex chamber.

3. Vortex chamber.
In the vortex chamber, the vortices from the channels are wound together, similar to the way a rope is spun together from a set of threads. A strong and stable vortex flow is formed inside the chamber, causing a strongly reduced pressure along the vortex axis.

Depending on the application, the vortex chamber can have different shapes. A trumpet shape produces a well-defined vortex with a smooth transition to downstream piping. Watreco's IVG units employed in cooling towers and irrigation systems utilise this shape. An egg shape with a narrow outlet causes an extensive spread of the fluid which is useful for example in a spraying application or when a large volume of liquid needs stirring. FlowMixer units employ this design strategy for watering, mixing and aeration/oxygenation applications.

An examination of the properties of vortexed water was made in 2010 and 2011 by the Polymer Technology Group Eindhoven BV (PTG/e), an independent research and knowledge institute which is a part of the Eindhoven University of Technology (TU/e). Samples were taken from municipal water in Holland, before and after VPT treatment. Water treatment was made with a standard Watreco vortex generator at a water pressure of 3.5 bar.

Viscosity
A decrease in viscosity was observed by PTG/e after VPT treatment. The difference was between 3% and 17%, depending on water quality and temperature. 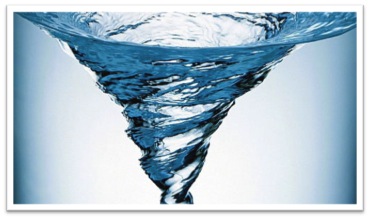 As shown by Albert Einstein in 1905, gas bubble content affects the viscosity of water. As bubbles (undissolved gases) are removed, a decrease in viscosity can therefore be expected.

Heat transfer
VPT treatment changed the melting behaviour of ice. The heat capacity was 5% higher for ice and 3% higher for liquid water.

Lime scale formation (precipitation) in hard waters normally occurs on surfaces such as pipes, heating elements and showerwalls. After treatment with the Watreco Vortex Generator, limescale formation is reduced and can even be eliminated. Old scaling often falls off over time.

The Watreco Vortex Generator is a passive system that doesn't use chemicals or electromagnetic fields. It creates a powerful vortex motion in the water, which causes strong pressure gradients and shear forces within the fluid. These extreme conditions induce lime particle formation within the fluid rather than at surfaces.

Lime particle formation in the water inside the Vortex Generator occurs in three stages:

1. Formation.
In the Vortex Generator, water rapidly moves between very low and very high pressure. This causes cavitation, the formation and implosion of microscopic bubbles. Each bubble implosion produces extreme local heat, which leads to the formation of lime particles in hard water.

2. Fragmentation.
Already formed lime particles fragment as they move through the pressure gradients and shear forces of the Vortex Generator, so that large particles break down into several small particles.

3. Precipitation nuclei formation.
Lime formation occurs at surfaces. With large amounts of microscopic lime particles in the water, the total surface area of those particles can be much bigger than that of pipes or heating elements. Such particles act as seeds (crystallization nuclei) for new lime growth. New lime formation will in this case add to the lime particles rather than cause lime scaling on surfaces and equipment. If enough lime particles have been formed under the extreme conditions of cavitation in the Vortex Generator, the chemical balance is shifted so that lime to some extent can be dissolved rather than formed. This dissolving occurs on both new and old lime, so old limescale often falls off after the installation of the Watreco Vortex Generator.

Some key commercial applications include:

VPT has moved out of the laboratory and into commercial and industrial applications across Europe and in the USA. It's a fundamental shift in water processing and purification technology - a design shift on the scale of the move from transistors to silicon chips.

MOSS represents this game changing technology across the Asia Pacific region. Wether you are a water authority, water efficiency retailer, local government, home or small business owner, farmer, engineer or chief innovation officer - call MOSS today on +61 3 98799886 / 0417 124 910 or email us at water@moss.org.au to discuss your interest and or needs.